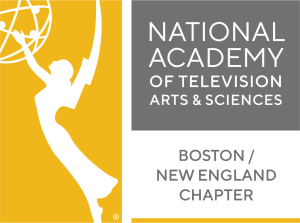 BOSTON, MA (August 31, 2022) – The Boston/New England Chapter of the National Academy of Television Arts and Sciences (NATAS) today announces Kathryn Shehade as the elected 2022 – 2024 Chapter President. Shehade was elected unanimously by the Board of Governors on Monday, August 22, 2022. Her first 2-year term begins tomorrow, Thursday, September 1.

Shehade succeeds outgoing President Danielle Mannion who remains on the board as the Chair of the Student Awards committee and Governor within the Chapter.

Shehade has been a NATAS member serving on the Board of Governors since 2005. During her time she has served on the Chapters annual EMMY® Awards Gala committee, the Silver and Gold Circle Awards committee, and as the Chapter’s PR and Promotions Chair.

“Kathryn has been an instrumental member of the Chapter,” said Timothy Egan, NATAS National Chair of Strategic Planning and Boston/New England Chapter Past President (2006-10). “Her presidency brings with it culture and diversity as the first multicultural woman to take the seat for New England. We look forward to having Kathryn’s contemporary approach and vision lead us toward a new era for television and video content delivery.”

A 20-year television industry professional, Shehade has worked as a Publicist, Producer and an Executive Producer within several Boston stations.

She served as Director of Communications and Community for the NBC and Telemundo Boston stations including NBC10 Boston, NECN, Telemundo Nueva Inglaterra and NBC Sports Boston from 2016 – 2022, where she was also the creator and Executive Producer of NBC10 Boston’s (WBTS) weekly community affairs program, This is New England.

From 2011 to 2016, Shehade worked for WFXT-TV FOX25 News – a COX Media Company, where she produced morning news segments, special projects and investigative reports for several series including “Fox Undercover” and “New England’s Unsolved.”

Prior to that, she held the role of station Publicist for WCVB-TV 5.

She has contributed to dozens of Regional EMMY® award programs garnering twelve regional EMMY® statutes for excellence in the television industry.

For a complete list of the Boston/New England Chapter of the National Academy of Television Arts and Sciences Board of Governors and elected officer list, click here.

NATAS Boston/New England Chapter is dedicated to the advancement of the arts and sciences of television, the fostering of creative leadership in the television industry, and the encouragement of excellence in artistic, educational, cultural and technical progress.