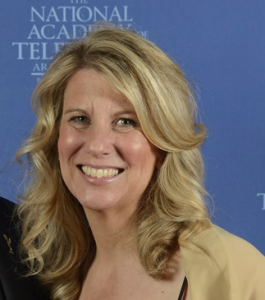 Mannion was elected unanimously by the Board of Governors on May 15, 2018.  Her 1st two-year term began on July 1, 2018.  Out-going President, Ro Dooley Webster passed the gavel to Danielle at the 41st Boston/New England Emmy® Awards Ceremony last June.

Danielle has been a NATAS member serving on the Board of Governors since 2008. During her time, she has served as Secretary, National Trustee and Student Awards Chair. She currently serves as the National Education Chair for the National Academy of Television Arts & Sciences creating and Co-Executive Producing the “National Student Production Awards” which is hosted by longtime NATAS supporter and friend, Tom Bergeron.

Danielle and her students are the proud recipients of awards including a Telly Award, and many NATAS regional Student Production Awards.

“Under the leadership of Ro Dooley Webster, the Boston/NE chapter of NATAS has experienced an increase in membership and hosted impactful award ceremonies honoring the work of media professionals, students and luminaries. I am looking forward  to continuing to serve the chapter with the same commitment to honor excellence and generate excitement about our Emmy® Awards. My work with students will hopefully inspire them to become part of our NATAS community as they become professionals in the industry.”

For a complete list of the Boston/New England Chapter of the National Academy of Television Arts and Sciences Board of Governors and elected officer list, click here.